Turning the educational tide at a school with a “challenging cohort”

“GCSEPod is proving its worth , both teachers and students find it useful and see the value in it. One unexpected benefit of GCSEPod has been its effect on less engaged students, including two boys formerly deemed to be among the most disruptive. It’s the way GCSEPod speaks to students on many different levels. GCSEPod is a massive asset to the school.”


Sometimes it’s the small steps that make the biggest impact, as the Ellis Guilford School in Nottingham can attest. The school’s GCSEPod lead, Matt Smith, explains the part the online teaching and learning platform is playing in helping turn the educational tide – not least amongst its more challenging students.

It’s the first Monday after the autumn half-term, and art and photography teacher Matt Smith, is in a buoyant mood.

And not just because he’s about to become a father for the first time. The latest school Performance Tables have just been released and Ellis Guilford School in Nottingham has achieved a Progress 8 score of -0.65 for the 2018-2019 academic year – well below average and putting it in the bottom 10% nationally.

It doesn’t seem something to be cheerful about. But the previous year the school – which became an academy in autumn 2018 – recorded a Progress 8 score of -0.97. It would be fair to say that Ellis Guilford has been performing well below average for a number of years.

Which is why Matt can’t keep the excitement out of his voice. Because whilst Ellis Guilford’s score of -0.65 might on paper seem nothing to shout about, it actually marks a turning point which has seen the school in the Basford area of Nottingham move into an altogether more prestigious national league – the top 8.5% most improved. 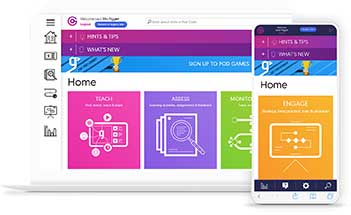 GCSEPod is proving its worth at our school